Alliance Bernstein: Can Advanced in Technology Keep a Lid on Inflation? 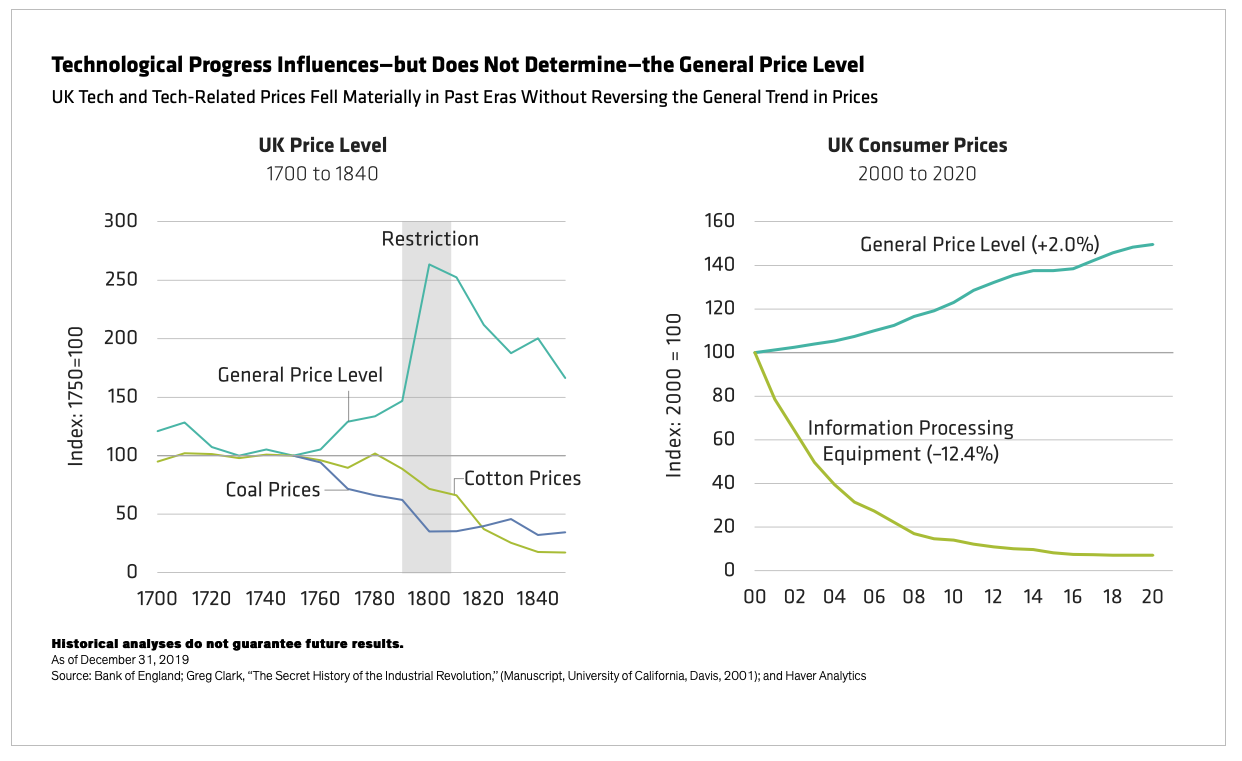 Technology is advancing at a rapid pace, exerting downward pressure on prices. But will this deflationary bias be enough to offset the impact of a new, higher-inflation regime? History suggests that won’t necessarily be the case.

Many would argue that technology is advancing faster than at any period in human history. Whether that’s right or not is a debate for another day. After all, just about any era you care to choose since the Industrial Revolution began has had its share of new inventions. But there’s little doubt about the impact that technological change is having across a range of prices.

Although those technology-related changes are all around us, we’d argue that the slower-moving structural forces exerting an upward influence on inflation are also increasingly important. That’s partly because two key disinflationary forces—demographics and globalization—have each reached an inflection point. But it’s also because populist pressures are likely to lead to the adoption of policies that alter the balance of power within the economy, in particular between labor and capital—e.g., minimum-wage reform. Throw in the pressure to deal with climate change, and the door to higher inflation is clearly being pushed ajar as governments focus on more pressing concerns.

We doubt that technological change will be sufficient on its own to offset the combined weight of those other factors pushing in the opposite direction.

Technology Has Not Determined the General Price Level in the Past

Past technological revolutions can provide a guide—and they have not always resulted in a lower general price level. During the first Industrial Revolution, for example, the general price level in the UK rose sharply when the British government suspended convertibility of paper money into gold between 1797 and 1821. That upward move happened despite intense downward pressure on the price of some commodities (Display above, left). This pattern has even been repeated in recent years, with UK inflation close to its 2% target despite massive declines in technology-related prices.

To take another example, the US price level dropped by 14.5% between 1920 and 1929 (an average inflation rate of –1.6%). Some commentators have linked this decline to electrification and other technological advances. But all of the reduction in the price level in the 1920s can be accounted for by two years—1920 and 1921. And the price falls in this period weren’t due to technology but to a belated attempt to rein in explosive postwar inflation.

The huge price declines seen in the US during the early 1920s were apparent in several other countries. In the UK, for example, the price level fell by 26% between 1920 and 1923 as the government prepared for a return to the prewar gold standard. But a few countries chose a different route, resulting in radically different inflation outcomes. Germany, Austria and Hungary continued to print money after the war, unleashing devastating hyperinflations.

It’s fair to say that the US was at the forefront of the technological advances that characterized the Jazz Age, and so enjoyed the greatest benefits from them. But it was certainly not alone in seeing those advances spread. Given the common technology experience, a much more plausible explanation for the vastly different inflation outcomes is the chosen policy regime.

So will this time be different? We’re not disputing that technological advances will continue to push down on inflation. But that’s pretty much been the case since the first Industrial Revolution and the evidence since then strongly suggests that technology can influence but not reverse inflationary trends. Instead, it’s the underlying policy regime that is decisive in determining longer-term inflation outcomes. And the direction of travel—in our view, at least—seems very clear.