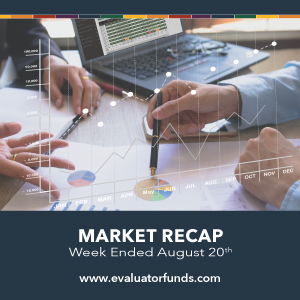 Nearly 91% of S&P 500 companies reported their earnings for the second quarter. Nearly 87% of the reported companies have actual revenues above the mean revenue estimate.

A dip in retail therapy

Even as sales continue to be well above prepandemic levels, spending on goods retreated over the last month. U.S. retail sales fell 1.1% in July relative to June. The rise in COVID-19 cases related to the spread of the Delta variant could be one reason for the consumer demand pullback.

Markets take a step back

Despite gains made by all three major U.S. stock indexes on Friday, the indexes posted weekly declines. The indexes were weighed down by losses among shares of economically sensitive companies such as banks and energy producers, and fears over the surge in COVID-19 infections.

Minutes of the U.S. Federal Reserve’s July 27–28 meeting revealed an emerging consensus to start reducing asset purchases before the end of the year. The minutes, which were released on August 18, also showed that Fed officials made it clear that a tapering isn’t a precursor to an imminent rate hike.