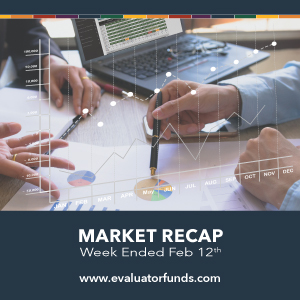 A big rally on Monday for small-cap stocks lifted the Russell 2000 Index, a small-cap benchmark, to another week of outperformance relative to large caps. The index climbed more than 2% for the week; since the end of September, the index has gained nearly 52%.

It was a big week for the NASDAQ, which outperformed the other major indexes and on Tuesday eclipsed the 14,000-point level for the first time to set another record high. Since a recent low on October 30, the NASDAQ has risen about 29%.

Quarterly earnings results continued to provide lift for equities. With fourth-quarter results in from about three-quarters of companies in the S&P 500, more than 80% have surpassed analysts’ earnings forecasts, according to FactSet. That’s above the five-year average ‘beat’ rate of 74%.

U.S. government bond yields slipped on Wednesday after a measure of inflation came in lower than expected. Core consumer prices—which exclude the often-volatile food and energy categories—remained unchanged in January compared with the previous month.