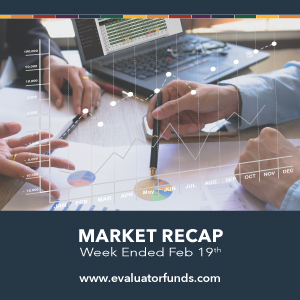 In a reversal from 2020, large-cap U.S. value stocks have been outperforming their large-cap growth counterparts year to date, and they outperformed again in the latest week. A value stock benchmark rose 0.3% while a growth benchmark fell 1.7%.

U.S. retail sales rose 5.3% in January compared with the previous month, surpassing economists’ expectations and snapping a three-month string of decreases. The rebound was attributed in part to stimulus payments that Americans received as part of a $900 billion measure that Congress approved in late December.

The housing market continues to be a catalyst for the broader U.S. economy, as a shortage of homes for sale continued to push prices higher in January. The National Association of Realtors said that sales of existing homes rose 0.6% in January compared with December. Relative to January of 2020, sales jumped nearly 24%.

Wednesday’s release of minutes from the U.S. Federal Reserve meeting in late January showed that policymakers viewed economic conditions as being “far from” the Fed’s long-term goals despite currently accommodative policies. Investors will have another chance to gain insight on the Fed’s thinking, as Chair Jerome Powell is scheduled to testify before congressional panels on Tuesday, February 23, and the following day.