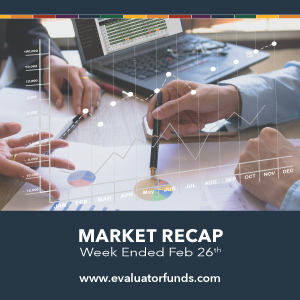 For the second week in a row, U.S. value stocks outperformed growth stocks by a wide margin—a short-term shift that threatens to reverse the growth style’s run of out performance in recent years. A value stock benchmark slipped 1% for the week while a growth benchmark dropped more than 4%.

After falling slightly in January, the S&P 500 and the Dow both recorded gains of around 3% in February. The NASDAQ finished around 1% higher after outperforming the other major indexes the previous month.

The year-to-date decline in prices of U.S. government bonds accelerated, sending yields sharply higher. On Thursday, the yield of the 10-year U.S. Treasury bond surged to as high as 1.54%— the highest level in more than a year—after closing at 1.38% the previous day. That marked the biggest daily yield increase in more than three months.

Congressional testimony on Wednesday from U.S. Federal Reserve Chairman Jerome Powell helped to trigger the week’s only significant rally. Powell downplayed inflation concerns and said that the Fed continues to expect low interest rates will remain in place for a long time. The S&P 500 climbed 1.1%—its biggest daily gain in more than three weeks.