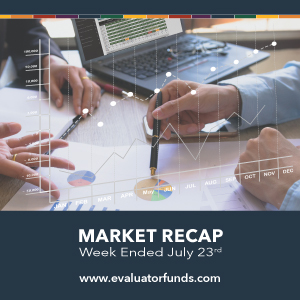 As of Friday, 88% of the S&P 500 companies that had reported second-quarter results exceeded analysts’ earnings estimates, according to FactSet. That so-called beat rate ranks above the 75% five-year average, and it’s currently the highest rate since FactSet began tracking that data in 2008. Results were in from 24% of S&P 500 companies as of Friday.

Strong quarterly earnings  helped stocks rebound from the previous week’s modest declines, as the major U.S. indexes rose around 1% to 3%, with the NASDAQ outperforming the S&P 500 and the Dow. The results pushed stocks above the record levels that they set less than two weeks earlier, and the Dow topped 35,000 points for the first time.

U.S. large-cap growth stocks extended their recent run of outperformance versus their value counterparts, as a growth index climbed gained more than 3% while a value index added 1%. The latest weekly result leaves the two equity styles with roughly equal performance year to date, with gains of 17% to 18%.

Despite concerns about inflation, the U.S. Federal Reserve is widely expected to keep its benchmark interest rate unchanged—and at a near-zero level—when it concludes a two-day meeting on Wednesday. Instead, Fed officials are expected to focus on beginning to wind down the central bank’s asset purchase program as the economy continues to recover from the pandemic.