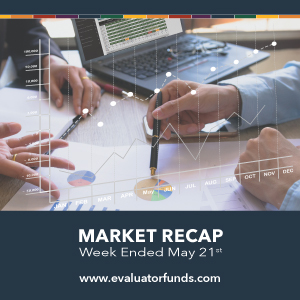 An index of leading U.S. economic indicators recorded its strongest monthly gain since last July. The 1.6% April increase that was reported on Thursday by The Conference Board marked the second consecutive solid monthly gain for the index.

New U.S. claims for unemployment benefits fell to 444,000 in the latest weekly count—the lowest during the pandemic. Claims have declined in five of the past six weeks at a time when many states are moving to cut off a federal benefit for unemployed workers.

A midweek spike in government bond yields petered out amid mixed data about the economy, inflation, and the outlook for U.S. interest rates. The yield of the 10-year U.S. Treasury bond climbed to 1.69% in intraday trading on Wednesday before falling to around 1.62% on Friday—about where it had ended the previous week.

Corporate executives clearly have rising prices on their minds, based on the large number who cited the term “inflation” in their conference calls with analysts during the nearly completed earnings season. As of mid-May, 175 companies in the S&P 500 had mentioned inflation, according to FactSet—the most since at least 2010.