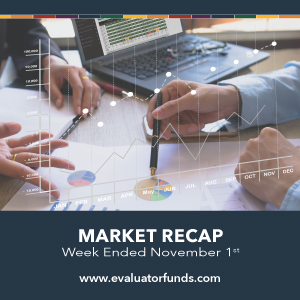 As widely expected, the Fed cut interest rates on Wednesday by 25 basis points, to a range of 1.5% to 1.75%. FOMC commentary hints that a December repeat is unlikely.

The S&P 500 and NASDAQ climbed to record highs, topping previous records set in late July. The Dow wasn’t far behind, ending the week up 1.4%, less than a tenth of a percentage point below its record high.

Roughly three-quarters of companies releasing third-quarter earnings so far—76% of S&P companies—reported earnings per share above analysts’ estimates, according to FactSet. More earnings are to come, yet misses reported by companies like Google/Alphabet may signal lower estimates for 2020.