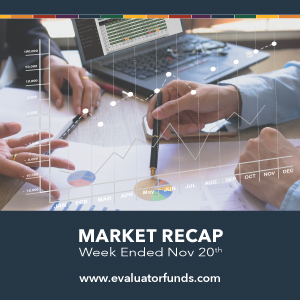 After underperforming the other major stock indexes by a wide margin the previous week, the NASDAQ outpaced its peers. That’s in keeping with the trend through most of 2020, as the NASDAQ has frequently outperformed the Dow and the S&P 500 owing to strong results from technology stocks that have a relatively large weighting in the NASDAQ.

For the second week in a row, U.S. small-cap stocks outperformed the broader market by a wide margin, as the Russell 2000 Index, a small-cap benchmark, climbed more than 2%. At Friday’s close, the index was up 23% from a recent low on September 23.

Figures from the just-completed quarterly earnings season show that profits at S&P 500 companies fell an average 6.6% compared with the same quarter a year earlier, according to FactSet. That’s the fourth-largest quarterly decline since 2009. Healthcare posted the strongest earnings growth at the sector level, rising 13.0%.

Wednesday will yield a bumper crop of economic reports in a holiday-shortened week. Releases are scheduled on everything from quarterly GDP to U.S. Federal Reserve meeting minutes, weekly unemployment claims, and more. U.S. markets will be closed Thursday due to the Thanksgiving holiday, and markets will close early for the day on Friday.