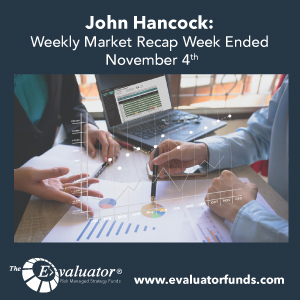 As expected, the U.S. Federal Reserve lifted its benchmark interest rate by three-quarters of a percentage point, marking the fourth time in a row it’s approved such a steep increase. Looking ahead to its December meeting, the Fed issued a statement that allowed for flexibility to either approve another three-quarter-point increase or ease back to a half-point hike.

Despite the risks of a recession, U.S. jobs growth continued to exceed expectations. The government reported on Friday that the economy generated 261,000 new jobs in October, above forecasts for around 200,000. In addition, a separate monthly report issued on Tuesday showed that job openings rose to 10.7 million—also above expectations.

Without the energy sector’s surging growth, companies across the S&P 500 would be reporting a year-over-year decline in profits of around 5% this earnings season, according to FactSet. However, factoring in the 139% jump in energy earnings, third-quarter net income across the index was expected to rise around 2%, based on the 85% of companies that had reported results as of Friday and forecasts for firms that haven’t yet released results.

A Consumer Price Index report scheduled to be released on Thursday will show whether inflation remained at an elevated level in October, despite six interest-rate increases so far this year from the U.S. Federal Reserve. In September, inflation slipped to an annual 8.2% rate from 8.3% the previous month, although core inflation excluding food and fuel prices rose to a higher-than-expected 6.6%.