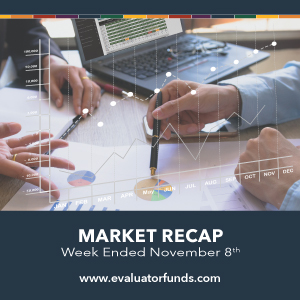 With holiday shopping around the corner, a gauge of U.S. consumer sentiment rose, easing concerns about prospects of a recession. The University of Michigan said on Friday that its preliminary index of November consumer sentiment was up slightly from the previous month.

While third-quarter earnings results continued to come in slightly ahead of expectations, the outlook for the fourth quarter has recently worsened. Analysts project that fourth-quarter earnings among S&P 500 companies will slip 0.4%, according to FactSet. If there’s another decline, it would mark the fourth consecutive quarter of earnings contraction—the first such instance in three and a half years.

Growing optimism about prospects for a partial trade agreement between the United States and China lifted stocks on Thursday, as Chinese officials indicated they expected the two nations would roll back tariffs imposed earlier in the conflict. However, President Trump said on Friday that the White House hadn’t committed to such concessions.

The yield of the 10-year U.S. Treasury bond climbed to 1.92% on Thursday, the highest level in more than three months, as selling pressure sent yields higher. As recently as early October, the yield was as low as 1.52%.