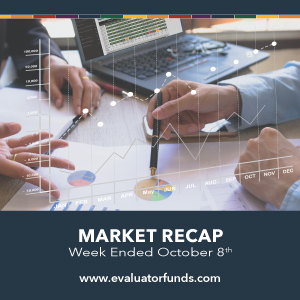 The pace of U.S. jobs growth slowed for the second month in a row and again fell short of most economists’ expectations. The economy generated 194,000 new jobs last month, trailing gains of 366,000 in August and 1.1 million in July. The unemployment rate fell to 4.8% from 5.2%, in part due to people leaving the labor force.

U.S. crude oil prices climbed for the seventh week in a row, briefly eclipsing $80 per barrel in intraday trading on Friday for the first time since late 2014. Oil’s rise has come amid a broader rally in commodities including natural gas and coal, whose prices have been driven up by recent supply concerns, particularly in Europe and Asia.

A government report scheduled to be released on Wednesday will show whether the recent spike in consumer prices carried over into September. The Consumer Price Index released last month showed that prices rose 5.3% for the 12-month period that ended in August. While high, the rate of increase was down slightly from July’s figure and was markedly below June’s surge in inflation.