(Thursday Market Open) A year ago today, the pandemic slammed home for millions of Americans as the professional basketball season got suspended with some games halfway through and others about to tip off.

Covid ended up being sort of the ultimate Black Swan, or exceptional event, for the markets. It was something we haven’t seen for over 100 years, in terms of a pandemic. As incredible (and tragic) as Covid turned out to be, the way the market has come out of it is absolutely amazing.

Barring any dramatic turnaround, it looks like the market’s pandemic plunge is going to be a proverbial blip in the long-term charts. Basically, we saw a breathtaking two-month drop followed by 10 months of rally thanks to quick fiscal and monetary stimulus accompanied by unprecedented medical progress. As one pundit said, the vaccine is the stimulus.

Getting back to the present, yesterday’s tepid inflation data (see more below) helped soothe worries, while the big data today is jobless claims. The report showed 712,000 new claims, down from an upwardly revised 754,000 the prior week. It’s good to see claims fall, but the slight increase in the earlier number isn’t great news. On the other hand, 712,000 is below analysts’ average 725,000 estimate, and the average continues to edge lower. It would just be better to see it drop more dramatically instead of staying at these extremely elevated levels.

Also, the European Central Bank (ECB) met today and announced it would increase bond purchases next quarter. Bond yields in Europe have been climbing lately, but remain negative. The announcement appeared to put pressure on yields in Europe and maybe here, too, where the closely watched 10-year yield fell below 1.5% early Thursday.

Growth and Tech stocks, which tend to be more sensitive to interest rates, charged higher on Wall Street in pre-market trading, with the Nasdaq (COMP) leading the way. Apple (AAPL), Microsoft (MSFT), Tesla (TSLA), and Alphabet (GOOGL) are some of those in this morning’s vanguard. Some of this may also be a reaction to the fiscal stimulus plan passing the House yesterday. President Biden is expected to sign it into law before the weekend.

But let’s see what happens with the Russell 2000 (RUT) index of small-caps, which is heavily weighted toward Financials. These falling yields might put pressure on the banks. We’ll see if a rising tide lifts all boats or if this tug of war continues between which types of sectors are going up and which are going down.

Continuing the trend where Tech stocks fall despite decent earnings, Oracle (ORCL) shares lost ground in overnight trading after beating analysts’ estimates and raising its dividend. Investors can be a pretty hard bunch to please, though the selling may have something to do with what some analysts saw as disappointing revenue guidance.

Tech Fails to Deliver an Encore

Tuesday’s Tech comeback after a few weeks of softness had some analysts talking about an “everything rally” and questioning why value and growth sectors can’t go up together. If the economy is going to grow 5% to 7% this year, as many economists now believe, it’s harder to argue against that.

Maybe not so fast. Tech ran into some roadblocks Wednesday after a strong start. The Tech-dominated COMP didn’t see much follow-through buying and finished slightly down despite gains in the other major indices. There’s no reason to think Tuesday changed the course of the last few weeks, and we probably need to see a few days of better performance and higher closes to be more certain about Tech’s footing. TSLA, which isn’t actually a Tech stock but often gets lumped in, couldn’t follow up Tuesday’s sharp gains, either.

Semiconductors, which you might call the “cyclical” part of Tech, continued to take the worst of the blow Wednesday, off nearly 2%. It’s kind of surprising to see that because you’d think they’d tend to do well in a quickly recovering economy where demand is on the rise and there’s a product shortage. The Philadelphia Semiconductor Index (SOX) remains in correction territory, down 11% since its peak on Feb. 16 (see chart). The industry itself appears to be in good shape, so this selloff might just reflect some of the reassessment we’ve been talking about where investors turn away from the stocks that led 2020’s gains.

One thing working in favor of Tech and other growth areas is what appears to be the enthusiasm of retail traders, who’ve shown they’re often willing to buy “mega-caps” and other Information Technology companies on the dips. Now, thanks to Wednesday’s stimulus approval, $1,400 checks are soon going to be mailed to many Americans. If enough of them decide to use the money for investment, this could be another shot in the arm for some of the more popular stocks and help put a floor under future selloffs.

Meanwhile, Gamestop (GME) shares are back to their old tricks this week, with waves of volatility. If you’re thinking about taking part in this trading, imagine a firefighter going into a burning building. You can be a hero but you can also be the guy who they’re holding a funeral for. Like a good firefighter, don’t go in without a plan for exiting.

Interest rates still have a lot of sway over where growth stocks might go next, so decent demand for yesterday’s 10-year Treasury auction helped soothe some worries and keep yields down. The auction was for $38 billion, and more debt is likely to hit the market soon as this new government stimulus takes effect.

A drop in the 10-year yield to 1.52% yesterday came as a bit of relief, and might have helped stocks overall. The peak was 1.6% earlier this week, and this morning the yield stood at 1.48%. Remember, the premium of U.S. yields sometimes draws in overseas buyers from markets where yields remain negative. This can act as kind of a natural brake on the yield rally and may be something we’re seeing. With the ECB saying today it plans to buy more bonds, this could mean increased pressure on European yields and more investors there reaching across the Atlantic for U.S. fixed income. Which in turn would put pressure on yields here.

The technical picture also remains a little shaky, not just in the Tech sector (which entered correction this week, defined as a 10% drop from highs). The S&P 500 Index (SPX) spent a lot of Wednesday’s session above 3900 but failed to finish there for the second straight day. A rally that keeps losing strength at the close is a rally that’s going to be questioned by people who look at things from a technical perspective. Today, the 3900 level again is one to consider watching. We haven’t seen the SPX make a new high in nearly a month. 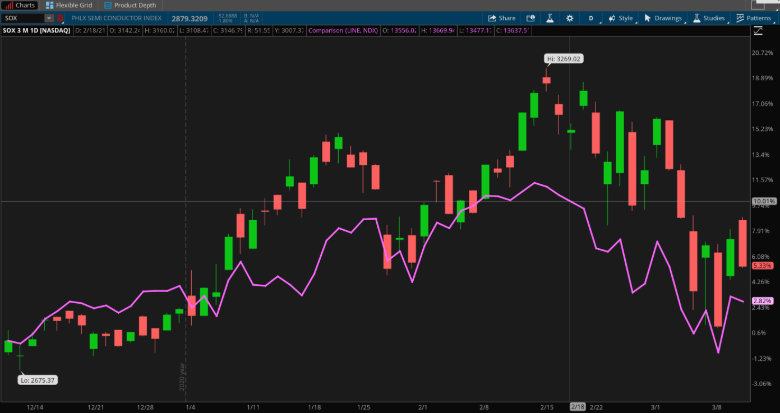 CHART OF THE DAY: CHIP CHOP: The Philadelphia Semiconductor Index (SOX—candlestick) is still outperforming the Nasdaq 100 (NDX—purple line) over the last three months, but has fallen more sharply from recent highs in the last few weeks and is in correction territory, down 11% from its peak. Data source: Nasdaq. Chart source: The thinkorswim® platform. For illustrative purposes only. Past performance does not guarantee future results.

Producer Prices Loom: Wednesday’s consumer price index (CPI) for February was in line with expectations, bringing some relief to a market nervous about pricing pressure. Tomorrow morning features producer prices, and analysts expect the core number (which strips out food and energy) to rise just 0.2%, according to research firm Briefing.com. The headline PPI could go up 0.6%, however.

As we’ve warned before, be careful assessing year-over-year inflation numbers the next couple of months and consider focusing more on the headline figures, which are month-to-month. The year-over-year numbers are going to start to look pretty hefty as they lap last year’s pandemic price collapse. Fed Chairman Jerome Powell has said there could be a temporary inflation rise but not one that’s going to last. Be ready for possible market overreaction to some of the economic data this spring, because not everyone is going to necessarily keep perspective.

Crude Awakening: Last week, OPEC and Russia surprised many market watchers by keeping crude production unchanged. Many had expected an output increase from the reduced levels OPEC is currently pumping, but maybe OPEC was watching the U.S. industry. Weekly crude supply growth here has taken off over the last few weeks, featuring eye-popping numbers seldom (if ever) seen before. After a barrel-busting U.S. crude oil build of around 21 million barrels during the last week of February, supplies grew nearly 14 million barrels the week ending March 5, the Energy Information Administration (EIA) said Wednesday. Analysts had expected a decrease of more than 800,000 barrels, OilPrice.com reported, and historically, weekly supply growth hardly ever hits double-digit millions.

So why didn’t this huge growth hit prices? Because the EIA also tracks gasoline inventories, and demand was off the charts. Gasoline supplies are down about 25 million barrels in the last two weeks, getting sucked up basically as fast as they’re being produced. This tells us Americans are using a lot of gas, which often indicates economic strength. Right now, at around $65 a barrel, crude prices aren’t quite high enough to raise eyebrows for people who own transport-related stocks. Take that number up to $70, however, and people might start to reassess travel stocks as margins get squeezed. Crude is up again this morning.

Dollar Near 2021 High and Gold Turns Around: Gold’s bounced back above $1,700 an ounce after breaking just about every support level known to traders since the year began. Whether it’s a “dead-cat bounce” or something more remains to be seen, but the technical trend remains negative for now. Many investors wonder why gold has struggled so much in this inflation-concerned environment. Some analysts say bitcoin has kind of replaced gold as a favorite inflation hedge among some investors, but others say cryptocurrencies are a passing fad.

The dollar, meanwhile, broke its January highs earlier this week, the first really positive technical move it’s made all year. A stronger dollar typically reflects a growing U.S. economy and tends to point toward continued strength in the same sort of cyclical stocks we’re seeing lead the way. Economic data and earnings have surprised to the upside most of the year to date, a nice tailwind for the dollar.

On the other hand, rising U.S. yields and a stronger dollar aren’t necessarily the best news for overseas stocks, which have been mixed this week. China’s Tech sector, especially, has seen some pressure over the last month.