Market Recap for Week Ended May 18: 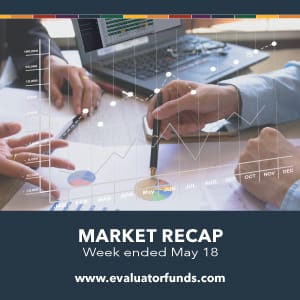 A small-cap stock index climbed to a record high as the positive outlook for U.S. economic growth continued to support shares of small companies. The Russell 2000 Index rose on Wednesday to a level that topped its previous record set in late January.

Positive economic data and expectations of further interest-rate increases helped to fuel the weekly decline in bond prices and the resulting rise in yields. One key data point was a report on Tuesday that showed a strong gain in retail sales during April.

The recent rise in U.S. government bond yields pushed the gap between the yields of the 10-year U.S. Treasury bond and Germany’s lower-yielding 10-year note to its widest point in nearly three decades. The breadth of that gap is one indicator of investor confidence in U.S. economic growth prospects relative to the more modest expectations for Germany, Europe’s largest economy.

Stock buybacks in this year’s first quarter broke a record, even though not all companies have reported their quarterly results and share repurchase activity. As of May 16, companies in the S&P 500 had reported $178 billion in buybacks, topping the prior record of $172 billion set in the third quarter of 2007, according to S&P Dow Jones Indices.